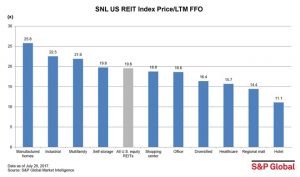 The two sectors were among the leaders of all publicly traded U.S. equity REITs in terms of the last 12 months funds from operations, according to S&P Global Market Intelligence data.

Note: Price to FFO is the REIT industry earnings multiple (P/E ratio in other sectors). This ratio reflects how much an investor is willing to pay for each dollar of FFO earned through company operations. P/FFO increase as prices rise faster than the FFO growth rate during a given period.

As of July 28, 2017, the manufactured homes sector led all publicly traded U.S. equity REIT sectors in terms of the last 12 months’ funds from operations (LTM FFO) multiple. The said sector posted a 25.8x LTM FFO multiple, outperforming the SNL US REIT Equity Index by 6.21 points. The industrial and multifamily REIT sectors followed with 22.5x and 21.9x, respectively. The hotel sector ranked last with a 11.1x price to LTM FFO.

Among the REITs focused on manufactured homes, Sun Communities Inc. had the highest multiple, at 26.2x, and finished July 28 with an $89.60 price per share.